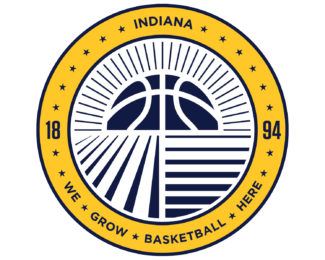 The nearly $200,000 investment features an expansion to two basketball courts at Tarkington Park, located at 3967 N. Illinois Street. Funding and resources for these improvements was made possible by the collaboration of the Pacers Foundation, Pacers Sports & Entertainment, Indianapolis Power & Light Company; and the Boiler Business Exchange, Purdue Cardinal Community Hoops, and Anthem Blue Cross and Blue Shield through the Parks Foundation. 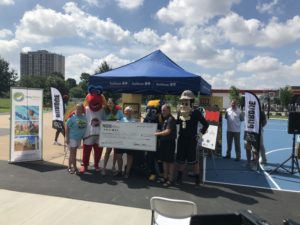 “The Parks Foundation is proud to identify and manage resources for parks and public spaces,” said Parks Foundation President, Lori Hazlett. “We are excited to facilitate initiatives that inspire so many great community partners to come together and invest in park assets that improve quality of life, connect people to places, and build community.”

“My wife and I are excited to work with others in the community to help make a positive impact,” said Purdue University basketball alumni, Brian Cardinal. “Our hope is that these courts are utilized by kids of all ages so that they can learn to play together work together and have fun together.”

The newly renovated basketball courts are part of recent investment at Indy Parks’ Tarkington Park. Last summer, community leaders celebrated the grand-reopening of Tarkington Park after a nearly $6 million investment which features a modern playspace, a café and restroom facilities, a splash plaza, and other amenities that are enjoyed by neighborhood residents and visitors to Indy’s Midtown.

Since 2013, the Pacers Foundation and Indianapolis Power & Light Company (IPL) have invested $1.1 million towards the construction or renovation of 14 basketball courts throughout the park system, including the first indoor court earlier this year at the Brookside Park Community Center.

Pacers Sports & Entertainment and the Pacers Foundation Saturday announced a continuation of their partnership with the Parks Foundation to renovate basketball courts throughout the Indy Parks system, and continue its support for the Indy Parks City-Wide Basketball program with a three-year, $300,000 commitment.

“We are delighted to support our beloved Indiana game at all levels,” said Pacer’s Sports & Entertainment President and COO and chairman of the Pacers Foundation, Rick Fusion. “For many of our youngsters, playing on an Indy Parks court is where they develop their first love for the game and we want as many of them as possible to play on great courts with the best goals. We look forward to investing in our parks, our community and our youth by renovating additional courts throughout the city over the next three years.”

For more than 20 years, the Indy Parks City-Wide Basketball program has made a positive impact on thousands of youth growing up in Indianapolis. Each year, this six-week program offers nearly 200 young men and women in our city’s urban core an opportunity to build and develop skills, understand the meaning of teamwork, and introduces them to positive role models.

“Thanks to the continued generosity the Pacers Foundation and Pacers Sports & Entertainment, this partnership will allow us to continue to grow and serve more of Indy’s youth,” said Indy Parks Director, Linda Broadfoot. “This support will allow us to continue offering young men and women opportunities to engage in positive activity by learning and growing in our programs, and being influence by our excellent recreation staff.”

Indy Parks City-Wide Basketball is open to kids ages 10 -18 and begins in January. To learn more about registering or volunteering, please call 327-PARK.