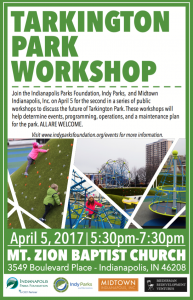 All are welcome to join the Indianapolis Parks Foundation, Indy Parks, and Midtown Indianapolis, Inc. on Wednesday, April 5 for the first in a series of public workshops to discuss future programming in Tarkington Park, located at 45 W. 40th Street.Â These workshops will help determine events, programming, operations, and a maintenance plan for the park.
Biederman Redevelopment Ventures, a consulting firm that specializes in programming, revitalizing, and operating parks, will be leading the workshop.

Tarkington Park is located inÂ Maple Crossing near the intersection of 39th and Meridian. The Tarkington ParkÂ Master PlanÂ was adopted by the City in November of 2012. The plan was aÂ group effort of numerous area neighborhood plans which called for area redevelopment, new investment, and improved public amenities. This park serves a diverse community in the Butler-Tarkington neighborhood, residents of downtown Indy, and out-of-city visitors.